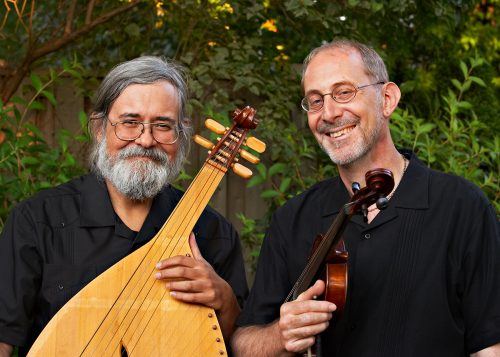 Today we would like to honor the remarkable long-term music project that is called Night Songs from a Neighboring Village.

Night Songs is a concert program that combines two musical traditions—the Ukrainian and Eastern European Jewish. These traditions have co-existed and interacted for centuries. And the traditions mirror the complex relationship between the two peoples that have nurtured them.

Night Songs is the brainchild of the Americans Julian Kytasty and Michael Alpert. They are both the sons of immigrants from the shared ancestral land of Ukraine.

Julian Kytasty offers the deep heritage of Ukrainian folk and religious song. He is renowned as a master of the Ukrainian lute-harp, or bandura.

Michael Alpert offers vocals, violin, guitar, and accordion. He draws upon klezmer music, Yiddish folk song, and the music of the Hasidic world.

All three of these Jewish musical genres flourished in Ukraine. And all three of these great art forms of the Yiddish world nourished each other. And they interacted closely with the diverse musical styles of non-Jewish neighbors.

And these non-Jewish styles include:
Ukrainian songs, hearty and fresh
Fragrant with field and barn
They fill the air with a dear warmth
That streams from the fires of home

Night Songs has toured the world since 1994, being featured in major concert venues in New York, Los Angeles, Jerusalem, Berlin, Toronto, Krakow and elsewhere throughout North America and Europe.

Both Kytasty and Alpert say the affirmation and development of their musical heritages is a life's work. Their collaboration explores the deep historical and cultural links between the two peoples.

“Michael and I realized that we had followed similar paths,” says Julian. “We make our individual musics from bits and pieces we picked up along the way. We used old recordings, our own research, our teachers, and surviving bearers of tradition. We are always striving to strike a balance between the old and creating new, living art. Together we have let our musical traditions have their own long overdue conversation.”

You know the world has kind of caught up to us. When we started doing Night Songs in the 90s, when we started working on the idea, it was for some people kind of a radical thought—that traditional Ukrainian and traditional Jewish music would be juxtaposed in this way, that we would find common ground. And of course today, when the whole relationship between Ukrainians and Jews in Ukraine is being re-thought on so many levels—political, cultural, but especially in the sense of a common homeland, a common country. All of a sudden the Night Songs work is part of that whole process and so I’m really glad we had a chance to play it in Ukraine, for the very first time August 27 at the Lviv Klezmer Festival. But really the thing that kept us going over the years, continuing to do this project, was just how many times we’d play it somewhere and somebody would come up to us, somebody who was conflicted about their heritage, their Jewish and Ukrainian heritage, somebody who was trying to figure it out for themselves, who felt themselves very strongly to be both ... and how do you define your identity that way. And after almost every concert somebody like that would come up and say “You know this is the concert I’ve been waiting for … all my life. And now, it all makes sense to me.”

Kytasty points out the music of Night Songs is the expression of two lives.

Cultures, and communities, left in fragments.

Fragments left in the wake of the totalitarian psychosis of the 20th century.

This has been Ukrainian Jewish Heritage on Nash Holos Ukrainian Roots Radio.

We would like our listeners to note that the full interview with Julian Kytasty will be available on the Ukrainian Jewish Encounter website.

From San Francisco, I’m Peter Bejger. Until next time, shalom!