The name for the Jewish New Year is Rosh Hashanah, which in Hebrew means the “head of the year.” It is one of the most important religious holidays for Jews … a day of awe and fear, but also a day of celebration.

Rosh Hashanah remembers the creation of the world. It’s a time for continuous introspection, looking back at the mistakes of the past year and making plans to do better in the new year… to do Teshuvah – returning to the paths of the Almighty. 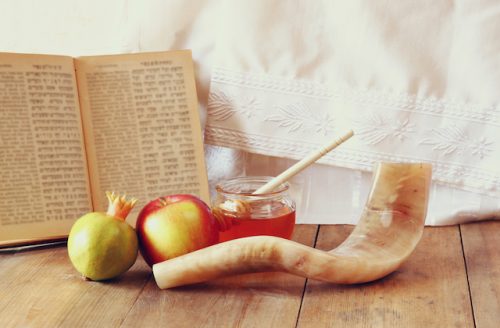 Rosh Hashanah is also called the Feast of the Trumpets, as the central observance of the holiday is the sounding of the the shofar, a ram’s horn. This sound is to awaken souls from their “slumbers” and alert them to the coming judgment. It is a reminder to dedicate one’s life to serving the Almighty and to follow His commandments.

The cry of the shofar is also a call to repentance. As the anniversary of man’s first sin, Rosh Hashanah is the first day of the “Ten Days of Repentance” which end with Yom Kippur.

At this time of year, the common greeting is “Shanah Tovah,” which means “May you enjoy a good new year.” No work is permitted on Rosh Hashanah. Much of the day is spent in synagogue. A special prayerbook called the machzor is used for Rosh Hashanah and Yom Kippur. Rosh Hashanah meals usually include apples and honey, to symbolize a sweet new year. Pomegranates are a popular Rosh Hashanah fruit for several reasons. Deuteronomy chapter 8, verse 8 refers to pomegranates as a native fruit of Israel. Their tightly-packed seeds symbolize unity between people. The number of seeds is thought to be 613, which corresponds to the number of commandments in the Torah.

Other symbolic foods include dates, black-eyed peas, leek, spinach and gourd, all of which are mentioned in the Talmud.

Typically, a round challah bread is served, to symbolize the cycle of the year. Some communities have their own unique customs, and serve symbolic dishes such as the head of a fish, to symbolize the “head” of the year and a reminder to focus on going through life as a head fish not a tail fish.

Gefilte fish and Lekach, Jewish honey cake, are commonly served by Ashkenazi Jews on this holiday. On the second night, new fruits are served in a special ritual called the shehecheyanu blessing – thanking the Almighty for a bountiful harvest of fruit.

Every Rosh Hashanah, there is a major pilgrimage to Uman – a city in central Ukraine. Tens of thousands of Hasidic and other Jews from around the world travel to Uman to pray at the burial site of Rebbe Nachman of Breslov.

The Rosh Hashanah pilgrimage dates back to 1811. For over a century, it attracted hundreds of Hasidim annually from Ukraine, Belarus, Lithuania and Poland. However, in 1917, the Bolshevik Revolution sealed off the border.

In the following decades, the savage repressions of the Bolsheviks, Nazis and communists forced the handful of Chassidim in Ukraine underground. Those discovered by the KGB were exiled to Siberia, where they died.

During World War II the Nazis decimated Uman’s Jewish population of 17,000. Nonetheless, the pilgrimage resumed in 1948, although on a drastically smaller scale.

In the 1960s, American and Israeli Hasidim began make the pilgrimage to Uman, to pray at the grave of Rebbe Nachman, travelling legally or illegally.

The pilgrimage has sparked tensions in the past, but local officials have been working to ensure a peaceful and well organized event. In fall of 2012 Israeli consular chief Alon Shoham remarked on the strong sense of the harmony and cooperation between pilgrims and locals.

In 2013, Ukrainian officials began looking at ways to help alleviate traffic congestion. This includes opening a decommissioned airport near Uman for pilgrims, and possibly running extra trains to the site.

At the Faina Petryakova Centre for Judaica, the Jewish Heritage Museum in Lviv, and Nash Holos Ukrainian Roots Radio, it is our goal to achieve full understanding of this saying in order to repair relations between the Ukrainian and Jewish people.

Listen to the audio here. Narrated by Renata Hanynets