Netanyahu in Kyiv: The personal reflections of an Israeli and native of Ukraine

Posted On: August 28th, 2019
Posted In: Commentary, Commentary and Analysis 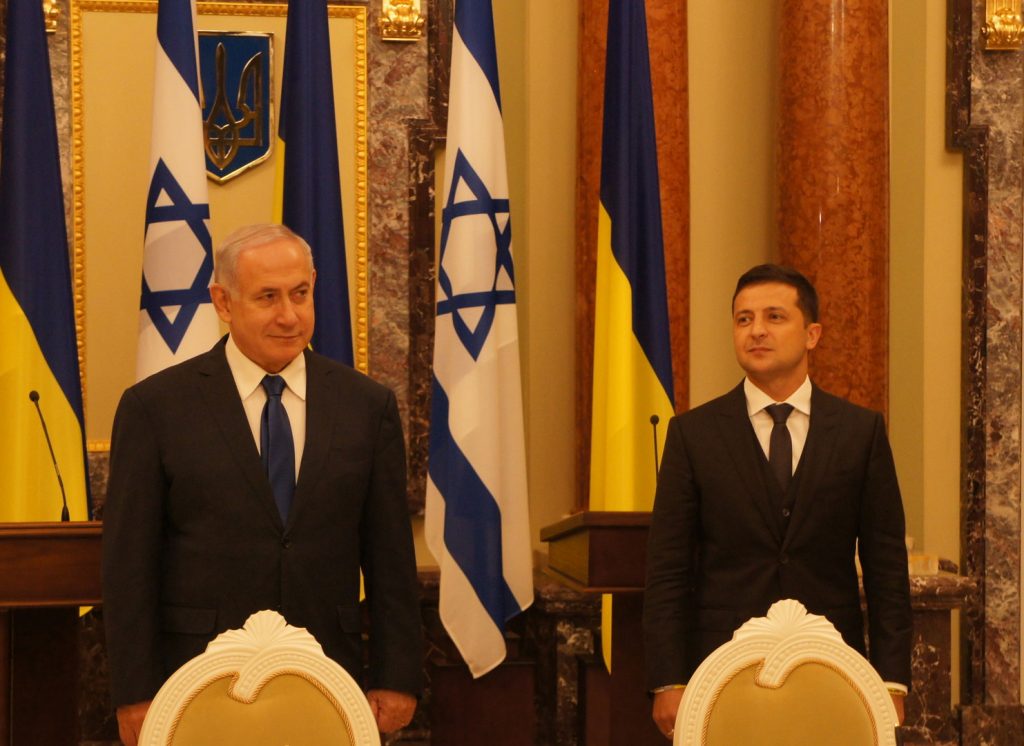 The visit of the head of the Israeli government to Ukraine on 18-20 August 2019—the first visit in twenty years—has already provoked much commentary and expert analysis. In this text however I want to share my own observations as well as the psychological feelings of an Israeli and Jewish native of Ukraine who was inside this visit.

Why did Benjamin Netanyahu fly to Ukraine right now? Because he could not help but pay a visit. A huge imbalance has arisen. The Prime Minister of Israel has flown thirteen times to Russia over the past five years to meet with President Vladimir Putin. At the same time, over the past twenty years, he has never flown to Ukraine as head of government.

This was especially striking on the eve of the early elections to the Knesset on 17 September 2019. Netanyahu wants the votes of repatriates from both Russia and Ukraine (approximately 350 thousand people from each country). Therefore, such a clear bias towards Moscow in the past had to be urgently compensated by a visit to Kyiv.

In addition, Bibi (as they call Netanyahu in Israel) promised President Volodymyr Zelensky after his victory that he would visit Ukraine. Therefore, another reason for the visit is to make the acquaintance with an extraordinary president and newcomer in world politics. I think for Netanyahu there was also an element of political curiosity: who is he, this young Ukrainian leader with Jewish roots, who won with such a fantastic result in a country that has such a complicated history of Ukrainian-Jewish relations?

The Netanyahu-Zelensky meeting reminded me of a meeting between a most experienced “shark” of Israeli and world politics with a peaceful “salmon” who is only gaining political experience. Bibi knows how to achieve his goals and to toughly promote the interests of Israel—he did not bend either to Obama or to Putin. Before flying to Kyiv, Netanyahu announced two important goals for his visit: discussing the transfer of the Ukrainian embassy from Tel Aviv to Jerusalem and pension payments from Ukraine for its citizens living in Israel. Therefore, I thought that the Israeli prime minister would direct all his strength and talents to persuade Zelensky on these two points.

To my great surprise, the newcomer Zelensky did not "bend" before the onslaught of Netanyahu. At a general briefing by both leaders, it was clear that Bibi did not receive any transfer of the embassy or pensions. In order to get out of this situation nicely, the mutual creation of two state high-tech support centers—an Israeli one in Kyiv and a Ukrainian one in Jerusalem—were announced. As for pensions for Ukrainian citizens living in Israel, Netanyahu only thanked Zelensky "for your decision to submit to the parliament the ratification of the pension agreement." 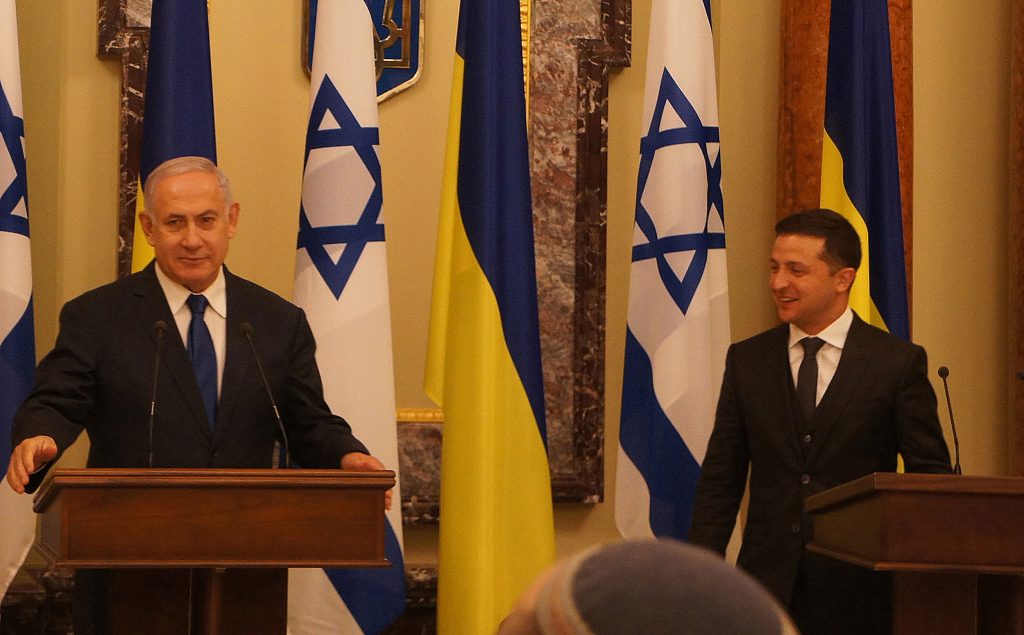 One hot topic did not warrant public statements from the two leaders, although it was one that aroused great interest among the media. This concerns the possibility of Netanyahu mediating between Russia and Ukraine. It is important to emphasize that it was the publication of Netanyahu's answer to my question on this topic on the UJE website that caused a powerful wave of publications in dozens of major media around the world three weeks before the visit to Kyiv.

This topic was most likely discussed during the closed part of the personal negotiations between Zelensky and Netanyahu. Note that immediately after returning from Kyiv on 23 August 2019, a telephone conversation took place between Netanyahu and Putin, during which Bibi told the Russian president about the results of his trip to Kyiv. Perhaps in the near future, we will see new steps by Netanyahu as a mediator in a peaceful settlement between Russia and Ukraine.

One of the most emotional episodes of the visit was the memorial ceremony in Babyn Yar.

Benjamin Netanyahu, the prime minister of a revived and strong Jewish state, answered: “This unforgivable crime did not happen on another planet. This happened just a few minutes’ walk from the lively center of Kyiv. The massacre at Babyn Yar, which was organized by the Nazis and their henchmen, set the stage for the murder of one and a half million Ukrainian Jews. For more than a thousand years, Jews and non-Jews have been good neighbors in Ukraine. They created communities, great works of art, various movements led by Hasidism and Zionism. All the achievements of thousands of years have been crossed out with a wave of the sword of the Nazis and their assistants.”

At the same time, Netanyahu emphasized that the Jewish people will always remember the Righteous Among the Nations who risked themselves to save Jews. Speaking about Ukraine, the Israeli leader noted: “The revival of Hebrew and the Jewish national movement took place here on Ukrainian soil. From here came such writers as Bialik and Chernikhovsky, such thinkers as Ahad ha-Am and Jabotinsky.”

“Having arrived for the second time in Ukraine in twenty years, I see the genius, creativity, activity, and innovations that we import here. I see how much sympathy and admiration we get here and I know that the basis of these relations is as solid as ever. I am very excited to visit Babyn Yar, and the understanding that we have come a long way from the gorge of death to the heights of nations,” the Israeli prime minister concluded.

At the end of the ceremony, Kyivan Rabbi Moshe Reuven Azman recited a Jewish memorial prayer, and both the President of Ukraine and the Prime Minister of Israel received a specially printed brochure in Hebrew with the translation of the prayer into Ukrainian. 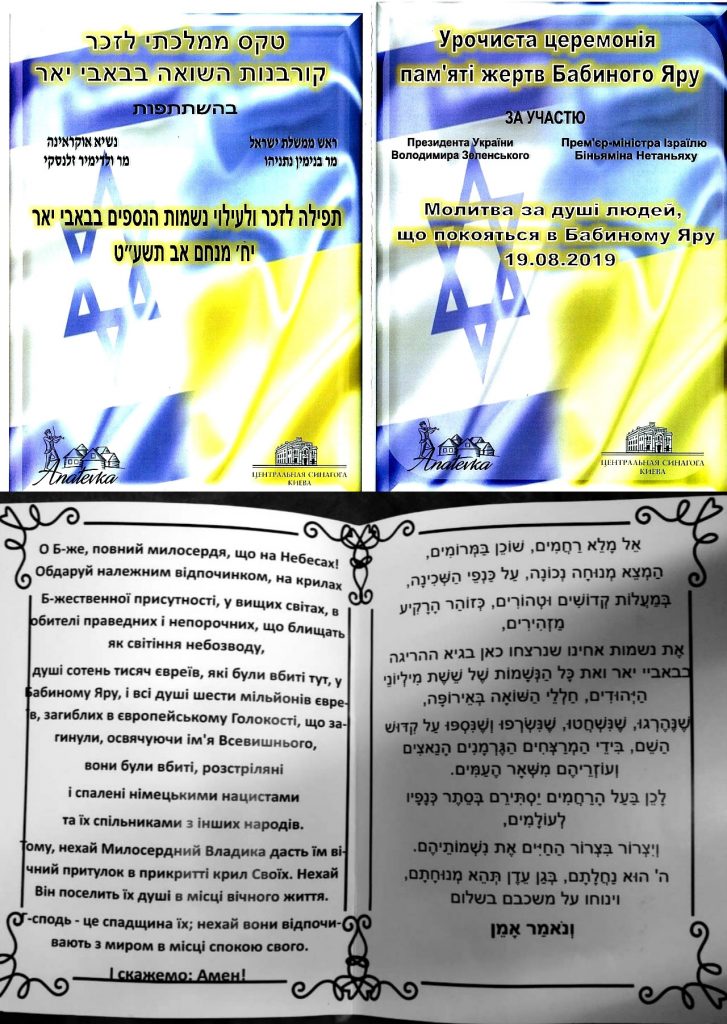 Two points during Netanyahu’s visit to Kyiv made me sad. The first is the deliberate provocation of the Israeli media against its prime minister. The Hebrew media came up with the story that Sarah Netanyahu allegedly threw a piece of Ukrainian bread on the ground at the plane's ramp during the welcoming ceremony at the airport. The purpose of this misinformation was to try to spoil the prime minister’s successful visit on the eve of the Israeli election.

The second point that made me feel ashamed was the absolutely terrible translation of Zelensky’s speech into Hebrew and Netanyahu’s speech into Ukrainian during the ceremony in Babyn Yar. Unfortunately, the Israeli side, instead of engaging a professional translator, invited a Hebrew teacher from elementary courses in Kyiv. As a result, up to fifty percent of the speeches of the two leaders were translated incorrectly or not translated at all. Netanyahu and Zelensky simply could not correctly understand each other because of the bad translation.

When I stood in the inner park of the Mariinsky Palace and saw the leaders of the Jewish and Ukrainian states who passed by the guard of honor of all the branches of the modern Ukrainian army, I felt the special symbolism and importance of this historical moment. I saw not only Netanyahu and Zelensky on the red carpet. 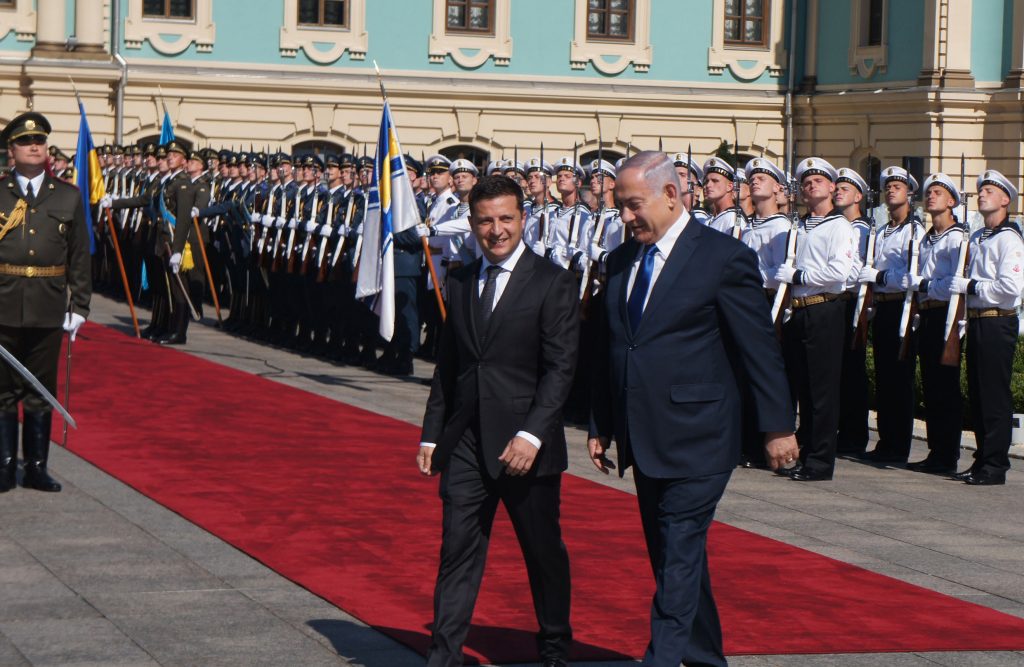 I was thinking about all this while in the Mariinsky Palace, which (for the first time in history!) received a Kosher certificate under the control of Rabbi Elisha Baram from Dnipro. Thirty-two distinguished guests (sixteen each from Ukraine and Israel) received a kosher dinner on 19 August 2019.

Related: The Arc of History Bends From Ukraine to Israel and Back Again

Video of Israeli and Ukrainian anthems in Mariinsky palace