Chief rabbi of Odesa and southern Ukraine Avraham Wolff: "Previously, I loved and respected the Ukrainian people. But now I just adore them!" 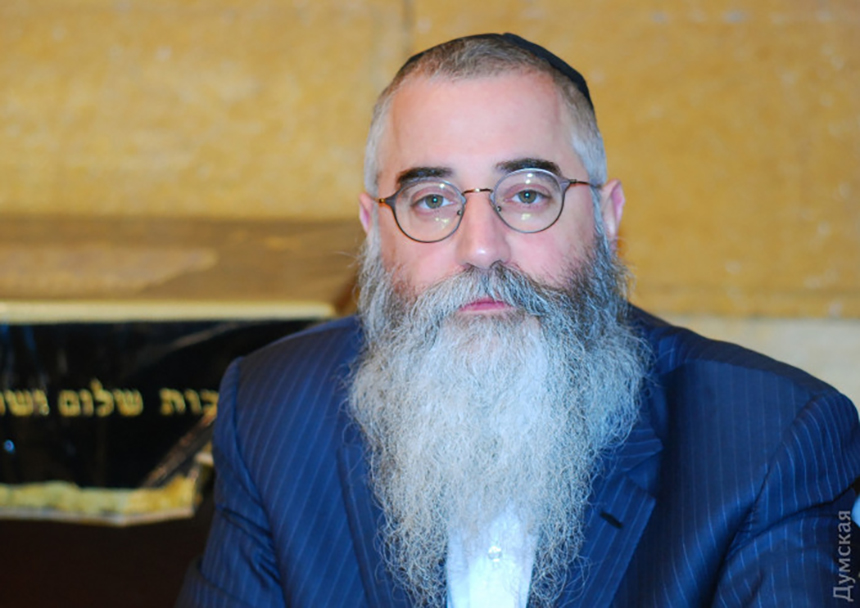 With the onset of large-scale Russian aggression, public life in Odesa has accelerated many times over. Volunteer, charitable, and creative projects have all gained momentum and are helping the city to function in new conditions.

National cultural societies and religious organizations are an important part of Odesa's scene. How are they doing in wartime? To find out, we came to Avraham Wolff, Chief Rabbi of Odesa and southern Ukraine.

We meet at the Beit Chabad Synagogue on Osypova Street. The only thing possibly suggesting wartime here is a strict guard at the entrance who demands to see not only a journalist ID, but also a passport.

Dumskaya has repeatedly written about Avraham Wolff. On March 16, together with representatives of other religions, he addressed the inhabitants of Odesa, saying that he was proud to work in Odesa. "This is the best city and the best country," he said then.

We are talking in the hall of the synagogue. It is quiet here at the moment as the evening prayer has just ended. Today, on the 40th day of the war, Avraham Wolff is still the smiling, charming and experienced rabbi we know. Only some weariness in his lively eyes betrays the fact that we are in a country at war and in a city that became a target of a powerful missile attack in the morning.

It is always interesting to talk to Rabbi Wolff. One feature that stands out in his speech now is that he uses the words "we," "our city," and "our country" much more often when talking about Ukrainians and Ukraine.

Dumskaya: How has your life and that of the Jewish community changed since the beginning of the war?

Avraham Wolff: There's more work to do. Evacuation, helping refugees, helping the community. Nobody has canceled the usual life of the synagogue, either. And, of course, communication with the press. Since the beginning of the war, I have given probably a hundred interviews to various media outlets from different countries. For some reason, everyone keeps asking me about "Nazism" and "antisemitism."

I answer: listen, I have lived here for 30 years, but I have not learned the Ukrainian language and cannot read documents in Ukrainian. And so, have I ever experienced any inconvenience or discrimination because of this? Never, not once.

There are 5,000 rabbis like me all over the world. Traditionally, we gather for a congress every year to discuss our issues. And I can frankly say that rabbis from all over the world envy me; they envy the opportunities to do good deeds that I have in Odesa.

We have opened schools, kindergartens, universities, and nursing homes. All of this has been done with the full support of the municipal and regional authorities. I know that in case of difficulties, I can always call the mayor or the regional governor, and I have no doubt that they will listen to me and will help me. What "interference" or, worse still, "infringement" are you talking about? The state has been directly helping me develop the community and do good deeds!

D: So, you think that there is no antisemitism in Ukraine?

A.V.: When I hear about the "antisemitism of Ukrainians," I always say: "Forgive me, but in the last presidential election, 75% voted for a candidate born of Jewish parents. What are we talking about?" They answer me: "But 25% did vote against him!" To this, I reply: "No, 25% voted for another candidate who has been rumored to be a Jew as well!"

D.: Do you personally feel safe in Ukraine?

A.V.: Listen to what I will tell you. Ukraine is the safest country in the world for a Jew.

For example, I live in Odesa. I have a beard and wear a hat. I walk around the city in Jewish clothes, and I have a black jacket with tsitses (part of the traditional costume. — Ed.). And at the same time, wherever I am, I feel absolutely free and in complete safety.

I don't have this feeling anywhere else. When I walk around Paris, I have to look back constantly: have I entered a dangerous quarter? Is there someone following me? During the long period I have lived in Odesa, I have never encountered hostility anywhere against me as a Jew.

Forget Paris! Even in Israel, 11 people were killed last month just because they were Jews. There has not been a single such case in Ukraine in the 30 years of its independence! I feel completely safe in Odesa. I did before this war.

Israeli radio journalists called me this morning and asked how the city was doing. And I told them: "Today is the day when the sky of Odesa has turned black" (on the morning of April 3, Russian troops launched a missile attack on the Odesa oil refinery, and the sky over the city was filled with smoke. — Ed.).

Of course, compared to other cities, it has been relatively calm in Odesa — G-d is probably protecting it. But everyone understands the danger we are in. I look at photos from Mariupol and Kharkiv with tears in my eyes. And what happened in Bucha is a disaster; it is beyond the grasp of any normal person.

I understand that our synagogue, too, can turn into ruins. But for now, we are praying, hoping, and helping.

D.: How are Jewish communities doing in the occupied territories? Do you have any information?

A.V.: Of course, I do. My brother Yosef Itzhak is now in Kherson. The community is operating there; they hold services. I ask him: what needs to happen for you to leave? He replies: I will stay here as long as possible.

D.: So, your brother remains with the community as befits a rabbi?

A.V.: Who knows how it's supposed to be? Only G-d. We don't know what is best. My brother does what he thinks is right.

D.: But Jewish children's institutions have been evacuated from Odesa, as far as I know.

A.V.: Yes, we moved the children out of the city with the help of our community and international organizations. In Berlin, we were given an entire hotel; there is a "little Odesa" there now. I visited them, and German President Steinmeier and his wife came to visit us. We had lunch with everyone, had a great conversation, and sang songs. After that, I returned to Odesa, while my wife Khaya remained in Berlin.

They ask me how many people have left Odesa. I reply that, in general, the percentage of Jews who left and those who went to fight is the same as among other nationalities; it's all proportional. Jews are citizens of their state, and now we are together with all of the Ukrainian people.

D.: I was astonished by the attitude of other countries towards refugees from Ukraine. We are used to the fact that this is usually a very difficult issue: bans, restrictions, illegal migration, etc. But now, almost all of Europe has opened its doors to Ukrainians. Why would they do that? Could there be a sense of guilt? Do Europeans remember how the Jews were denied asylum during World War II and then became Holocaust victims?

A.V.: Let's not harbor pleasant delusions. Everyone in this world is pursuing, above all, their own interests, and that's normal. Yes, people are welcoming refugees and hosting them in their homes, and volunteers are sincerely helping — all this is there. But states have their own interests.

So, given the current demographic situation in the European countries, they will only be happy to replenish their population with civilized, educated, and hard-working Ukrainians. I assure you: they opened the borders not only out of love and empathy. It is, above all, in their own interests. 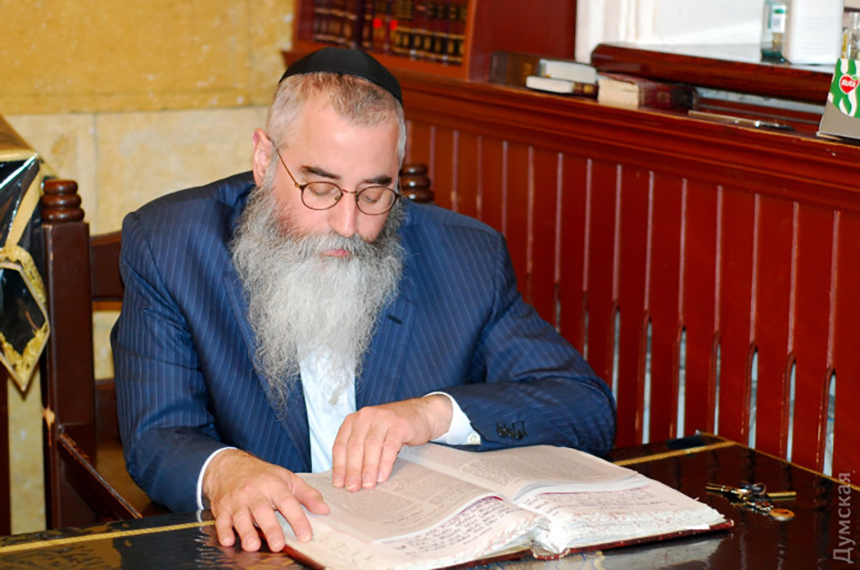 D.: How do community members serve in the Ukrainian army? Do they have the opportunity to remain Jews, keep the commandments, and observe Shabbat?

A.V.: You can always remain a Jew because the main commandment is to save lives. In general, we have a lot of commandments, 613 in total. But only three of them are absolute and can never be violated. The first one is not to worship other gods. Second, adultery with a married woman is forbidden. And third, you shall not kill a person who isn't going to kill you.

These three key commandments can be observed anytime, anywhere. Everything else is allowed to be violated, provided that a person's life depends on it. Life is the most important thing; there will be neither Shabbat nor anything else without life.

Now it is relatively calm in Odesa, thank G-d. Our volunteers and mobilized soldiers come to morning prayers and then go to the service.

D.: Has your attitude towards Ukraine changed over the past month?

A.V.: I have already said this and will repeat it one more time. Previously, I loved and respected the Ukrainian people. But now, after the beginning of the war, I just adore them! I could not even have imagined how much people would unite and rally together and how determined they would be to defend their homeland.

After the war, I will apply for Ukrainian citizenship. Having a residence permit, I live here freely now and enjoy all the rights, except for the right to vote in elections. But now, I want to become an integral part of the Ukrainian people.

D.: Well, considering how many good deeds you have done for Odesa and Ukraine…

A.V.: There is one nuance here. According to the current law, I would have to renounce my Israeli citizenship, which is impossible for me. But if there are options, I will definitely become a [Ukrainian] citizen. It will be a great honor for me.

Incidentally, after the war, Ukrainian passports will be greatly valued. There will be a lot of people wanting to obtain Ukrainian citizenship. But don't rush it, don't go around handing out passports just like that — a person really has to earn the title of a Ukrainian citizen.

D.: You have said you are surprised at how the Ukrainian people have united now. But cases like that have happened in the history of Israel.

A.V.: Yes, they have. But there, we unite against a clear enemy who has never concealed its desire to destroy us completely.

In Ukraine, the situation is entirely different. Yes, people of different nationalities live here. But, by and large, on both sides [of the war] are the Slavs. You have a common faith, and your languages have much in common. Nothing here is predetermined from birth. It is a question not of origin but self-identification. Everyone must figure out for themselves which side they are on. And I am glad that the citizens of Ukraine made the right choice and immediately at that.

D.: You have drawn parallels with Israel's history. Do you see any religious similarities in the sacred books?

A.V.: Of course, the story of David and Goliath immediately comes to mind. Why did young David defeat the giant? Not because he was bigger, stronger, or more agile or had better weapons. True, Goliath was very strong and well-armed. But David still defeated him — because he was defending his land and his people.

What does the Book teach us with this example? In this kind of situation, a person develops inner strength that allows defeating any enemy, no matter how big and strong.

This is precisely what is happening before my eyes in Ukraine now. Ukrainian soldiers are defending their land, their homes, and their children. They have this inner strength. And I know that they are capable of defeating any enemy.

Related: Putin’s War and the Making of a Ukrainian Jewry