“Righteous Among the Nations” Award Ceremony in Lviv

The “Righteous Among the Nations’ award ceremony, organized by the Embassy of Israel in Ukraine and attended by Ambassador Eliab Byelotserkovski, took place in Lviv on November 7th. The award is dedicated to non-Jews who saved Jews during World War II.

Three Ukrainian families—the Didukhs, Melnychuks, and the Repytskys—were presented the award in the Lviv City Council assembly hall for saving Jews from extermination by the Germans during the Second World War. The “Righteous Among the Nations” title has been awarded to nearly one hundred people in Lviv.

Andriy, Anela, and their daughter Stefaniya Didukh from the village of Triytsya in the Lviv region rescued four Jewish brothers–Meylah, Shmuel, Jacob, and Joseph Pechenyk. Stefaniya Petrushka, who has detailed memories of the war, came to the award ceremony with her children and grandchildren. 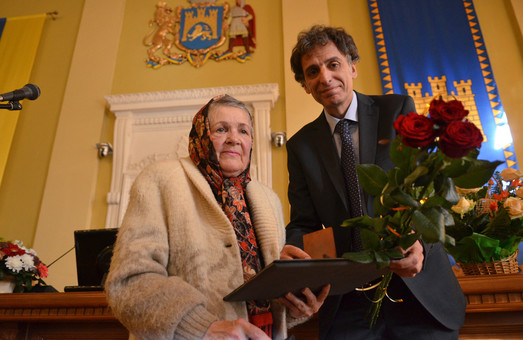 Stefaniya Petrushka recalls, “We lived in the village of Triytsya and Pechenyk’s family lived in the village of Toporiv five kilometers away. Our parents got to know each other when we went shopping to their store. When the Germans came, our father took them home and hid them in our house. They lived on the roof and when the German roundups started, they dug a hole in our pantry and made a cellar there so that they could hide. The entrance to the cellar was hidden with a small so-called wheat barricade. The Germans were looking for Jews in different houses all the time, night and day. When they came to us, they said they would punish to death everyone if they found someone. Thank God, they did not find anyone. We all were extremely scared at that moment, I was only ten years old then.”

The Didukhs hid the boys for more than a year. The family fed and clothed them and shared everything they had. After the village was freed from Nazis, the brothers went to Poland. Three of them later emigrated to Israel and one to the United States. In the 1960s Joseph wrote a letter to the Triytsya village council head and asked to find the family of his saviors. The letter was given to Andriy and Anela, who lived in Lviv at that time. The two families have communicated since then.

The ambassador said Israel is making great efforts to find the Righteous among the Nations and to share the history of these people.

Byelotserkovski said, “People in Israel are performing research, looking for documents, and having talks with people who lived through these events. Unfortunately, over time the number of these people decreases. Sometimes the award is given to the Righteous when they are already dead. For us, the country of Israel, it is important to show that in this tragic period of life for our people there were still those who risked everything and despite everything saved Jews.”