Winnipeg – Oseredok Ukrainian Cultural and Educational Centre and the Ukrainian Jewish Encounter (UJE) are pleased to present an exhibition entitled A Journey Through the Ukrainian-Jewish Encounter: From Antiquity to 1914. The exhibition, which opens Monday, June 15, 2015 and runs through to Saturday, June 27, 2015, is being shown at the Oseredok Centre, 184 Alexander Ave. East.Exhibition hours are Monday to Saturday, 10:00 am – 4:00 pm. 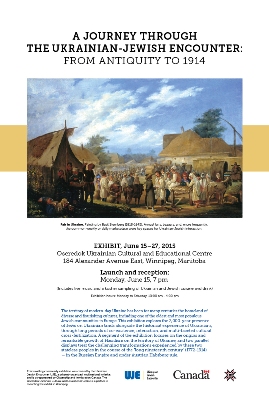 Created by UJE and co-funded by Citizenship and Immigration Canada, this multi-media exhibition offers an integrated narrative of the historical experience of these two historic peoples, side by side through periods of normalcy and crisis, shaped by cross-cultural influences, under diverse political regimes, over centuries. The blended story will be of particular interest for both Jewish and Ukrainian audiences, but also for a wider Canadian public.

The territory of modern-day Ukraine has been for many centuries the homeland of diverse and flourishing cultures, including one the most populous Jewish communities in Europe, whose presence on Ukrainian lands began about 2,000 years ago. A segment of the exhibition focuses on the origins and remarkable growth of Hasidism on the territory of Ukraine, and two parallel displays treat the challenging transformations experienced by these two stateless peoples in the course of the “long nineteenth century” (1772-1914) – in the Russian Empire and under Austro-Hungarian rule.

This exhibition is presented in the belief that these two peoples have much to gain by appreciating their common historical experience in all its complexities – that despite periods of crisis and intermittent violence, Ukrainians and Jews have lived side-by-side for centuries creating and sharing enduring cultures that continue to inform their identities today.

The Ukrainian Jewish Encounter (UJE), a privately organized multinational initiative launched in 2008 as a collaborative project involving Ukrainians of Jewish and Christian heritages and others, in Ukraine and Israel as well as in the diasporas. Its work engages scholars, civic leaders, artists, governments and the broader public in an effort to promote deeper mutual comprehension and solidarity between the two peoples.

Oseredok Ukrainian Cultural and Educational Centre is a not-for-profit heritage institution whose aim is to collect, document, present, and share Ukrainian cultural heritage with Canadians. It is recognized for the wealth of its collections of Ukrainian folk art, fine art, music, and community history. Oseredok shares its collections through public programs of exhibitions, public lectures, workshops and courses.

This travelling community exhibition premiered in Toronto at the Schwartz/Reisman Centre in Vaughan in May. After Winnipeg, it will return to downtown Toronto July 7–19 to the Ukrainian Museum of Canada–Ontario Branch, St. Vladimir Institute, and then travel to Edmonton and Montreal in August/September.