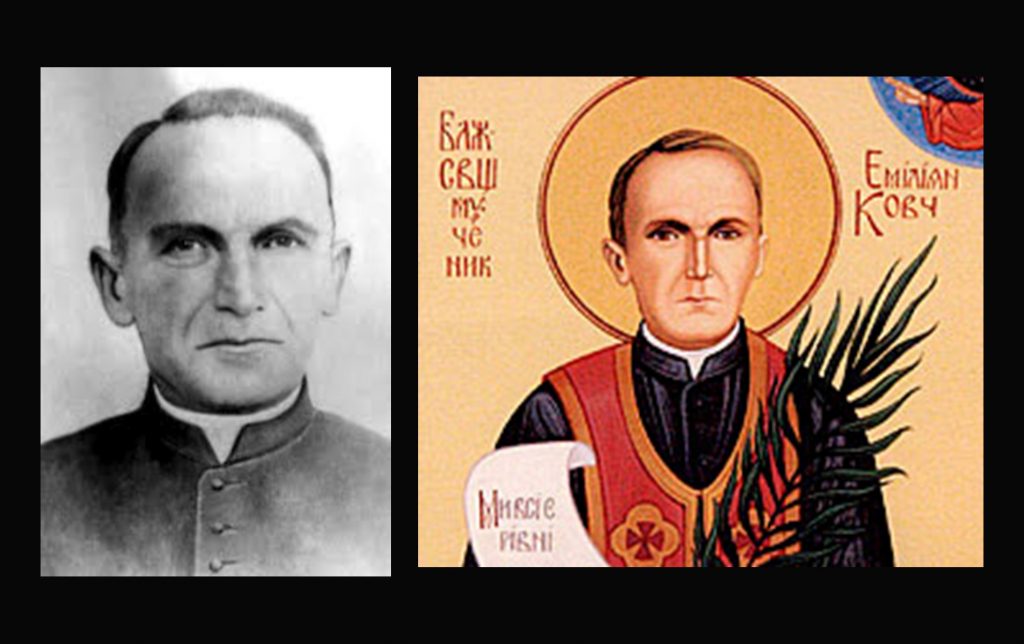 Omelian Kovch (1884–1944) was prisoner Number 2399 in Barrack 14 at the German concentration camp Majdanek on the outskirts of the Polish city of Lublin during the Second World War. The front line was approaching, and his fate was uncertain.

Kovch's path to the camp was arduous and eventful. He was born in the picturesque Carpathian Mountain village of Kosmach in southern Galicia, then part of the Austro-Hungarian Empire. His father was a Ukrainian Greek Catholic priest, and his mother the daughter of a parish priest (men who desire to enter the priesthood of the Ukrainian Greek Catholic Church may get married prior to being ordained). After secondary school studies in Lviv, Kovch was in Rome as a seminarian in the Greek Catholic College of Saints Sergius and Bacchus and a student at the Universita Urbaniana of the Congregation for the Propagation of Faith. He married Anna-Maria Dobrianska in 1910, and they eventually had six children.

In 1912, Father Omelian volunteered to serve Greek Catholics in the multi-confessional and mountainous lands of northwestern Bosnia and Herzegovina. He became a chaplain in 1919 in the Ukrainian Galician Army during the failed struggle for Ukrainian independence after the First World War. Father Omelian was then appointed in 1922 to the parish of Peremyshliany, a Galician town now under Polish rule and populated with Jews, Poles, as well as Ukrainians, where he established a vibrant ministry. (Distinguished natives of the town include the former Polish Foreign Minister Adam Daniel Rotfeld and the psychoanalyst Wilhelm Reich.) The Polish police searched his home repeatedly during the interwar period — reportedly some forty times — and he was arrested and held for questioning for longer or shorter periods.

The Soviets occupied Peremyshliany in 1939 during the outbreak of the Second World War, instituting a wave of arrests and repression. Father Omelian and two of his daughters were being arrested just as the Nazi attack on the USSR started on 22 June 1941. The German bombing of Peremyshliany disrupted the arrest, enabling Father Omelian to escape and now face a fresh new horror.

The persecution of Jews began immediately after the German occupation of Peremyshliany. One day the Germans firebombed the synagogue, closed the doors, and surrounded the building with soldiers. Jewish community representatives ran to the Kovch house for help. Father Omelian immediately ran to the synagogue and, in perfect German, ordered the police to desist. The Germans were so shocked that they dispersed. Father Kovch rushed to the doors of the synagogue and began pulling the victims from the flames.

As Jews were ghettoized and being deported to death camps, many began turning to Father Omelian with a request that he baptizes them in the hope that this would increase their chances for survival. Father Omelian was at first reluctant, but in these dire circumstances, he did not refuse insistent requests and conducted mass baptisms of hundreds of Jews. Most of the newly baptized in the end suffered the fate of other Jews.

On 30 December 1942, Father Kovch was arrested, and the Gestapo took him to Lviv, where he was tortured in the notorious prison on Lonskoho Street. The head of the Ukrainian Greek Catholic Church, Metropolitan Sheptytsky, family members, and friends strived mightily to free Father Omelian. The Nazis were ready to release him under the condition he promises not to protect and baptize any more Jews. He declined.

Father Omelian was sent to Majdanek, and efforts continued to release him. He was able to get a few letters out that have been preserved. He writes: "I understand that you are making efforts for my liberation. But I ask you to do nothing. Yesterday they killed 50 people. If I am not here, who will help them endure these sufferings?"

Approximately eighty thousand people were killed in the camp over 34 months, including about 59,000 Jews. Father Omelian wrote: "I thank God for his benevolence to me. Besides heaven, this is the only place where I would want to be. Here we are all equal: Poles, Jews, Ukrainians, Russians, Latvians, Estonians. Of those present, I am the only priest. I cannot even imagine what would be here without me. Here I see God who is the same without regard to the religious difference that exist among us."

Bearing witness at Konzentrationslager (KL) Lublin, known as Majdanek, Father Omelian declared, "They die in different ways, and I help them cross this bridge into eternity. Is this not a blessing? Is this not the most splendid crown that God could place on my head? Precisely so. I thank God a thousand times each day that He sent me here. I ask nothing more of Him. Do not be troubled, and do not lose faith on my part. Instead, rejoice with me. Pray for those who created this concentration camp and this system. They are the only ones that need prayers…May God have mercy upon them."

Father Omelian Kovch died on 25 March 1944, three months before the liberation of the Majdanek camp on 23 July 1944.

On 9 January 1999, the Jewish Council of Ukraine proclaimed him a "Righteous of Ukraine."

His beatification took place on 27 July 2001 in Lviv, during the Byzantine-rite liturgy conducted by Pope John Paul II.