In 2009 UJE initiated a series of roundtable discussions, engaging leading scholars/experts from around the world to address key issues relating to the shared history of Ukrainians and Jews.

The first roundtable was held in June 2009 in Salzburg, Austria, at the Schloss Leopoldskron. That meeting covered over three centuries, addressing issues in Ukrainian-Jewish history and relations from the sixteenth century to World War I, including discussion of relatively harmonious co-existence and economic intercourse, as well as tensions and episodes of violence under the Polish-Lithuanian Commonwealth, notably the Cossack massacres of Jews during the 1648-1649 anti-Polish uprising led by Bohdan Khmelnytsky, and again in 1768 at time of the Haidamak rebellion; early nineteenth century narratives that introduced negative Jewish stereotypes into Ukrainian historical thought and memory; interethnic tensions in Galicia in the late nineteenth and early twentieth centuries, mostly on economic grounds and in response to modernization; and Ukrainian-Jewish experience during the first Word War.

The second roundtable meeting (held at Ditchley Park in the UK in December 2009) focused on the revolutionary era and the interwar years. Topics include the period of unprecedented Jewish-Ukrainian cooperation in the Central Rada during the short-lived Ukrainian National Republic established in 1917, as well as in the West Ukrainian People’s Republic (1918-1919); and Jewish relief aid extended to non-Jewish Ukrainians in the 1921-1923 famine. Painful aspects addressed for this period include the role of various Ukrainian armed groups, among others, in the civil war pogroms and the “Petliura question”; the emergence of the zhydokomuna myth; the Ukrainian Famine and the Great Terror of the 1930s; the prominence of some Jews in the Soviet government and the Communist Party, especially in the security apparatus, and the use of this development in assigning collective responsibility to Jews for Soviet crimes.

A third event took place in October 2010 in Jerusalem, in partnership with the Israel Museum and the Hebrew University. This conference did not focus on a particular historical period but rather on Ukrainian-Jewish interaction in key cultural domains (including cross-cultural influences in music, art, architecture, language), as well as mutual stereotypes that have become embedded in the respective cultures (as expressed in folklore and literature). An initial exploration of the latter theme also took place in January 2010 at a symposium organized by UJE in collaboration with the University of Toronto, on the image of the “Other” in Ukrainian and Jewish literatures.

The next roundtable meeting in the shared historical narrative series was held in Potsdam (at the Cecilienhof) and Berlin in June 2011, organized in association with the Konrad Adenauer Stiftung. Coinciding with the seventieth anniversary of the launch of Operation Barbarossa, this meeting treated the most difficult aspects of the Ukrainian-Jewish relationship, arising out of the experience of World War II on the territory of Ukraine. Topics treated include: the first stages of violence, specifically the 1941 pogroms and massacres; and the destruction between 1941 and 1944 of 1.5 million Jews on the territory of Ukraine, as well as the deaths of millions of other civilians and Prisoners of War, in addition to the experiences of forced labour and displaced persons. There was also discussion of collaboration, both the notion and the range—from coerced assistance to volunteered service by Ukrainians in German-controlled armed formations and auxiliary police involved in roundups of Jews, clearing ghettos, and guarding concentration camps; and comparison with the role of the Jewish police. The discussions also provided context by referring to experience in other areas under German occupation in Western and Eastern Europe. Sessions were also dedicated to resistance, sheltering Jews, and insurgency and counter-insurgency in 1943-1947. A separate session was dedicated to evidentiary sources, written and oral, their credibility and use.

Several additional experts roundtables are planned, which will focus on issues relating to the postwar Soviet period, the period since Ukrainian independence, and contemporary politics of history and memory. 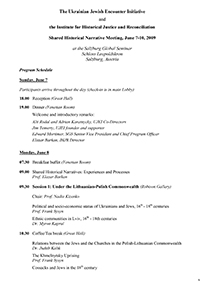 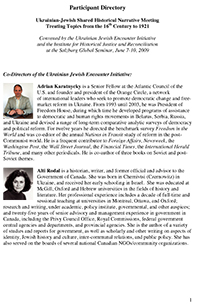 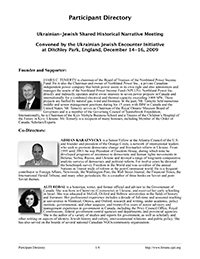 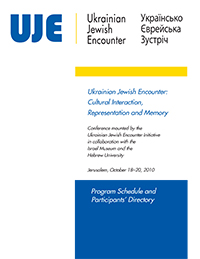 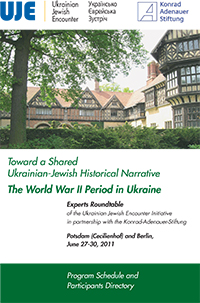 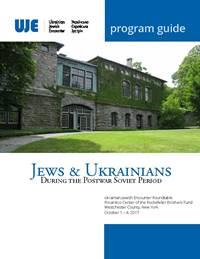