The author of ‘Hitler’s Furies’ seeks to describe the fate of the women who, without holding official positions in the Third Reich, were perpetrators of the Holocaust: Translator 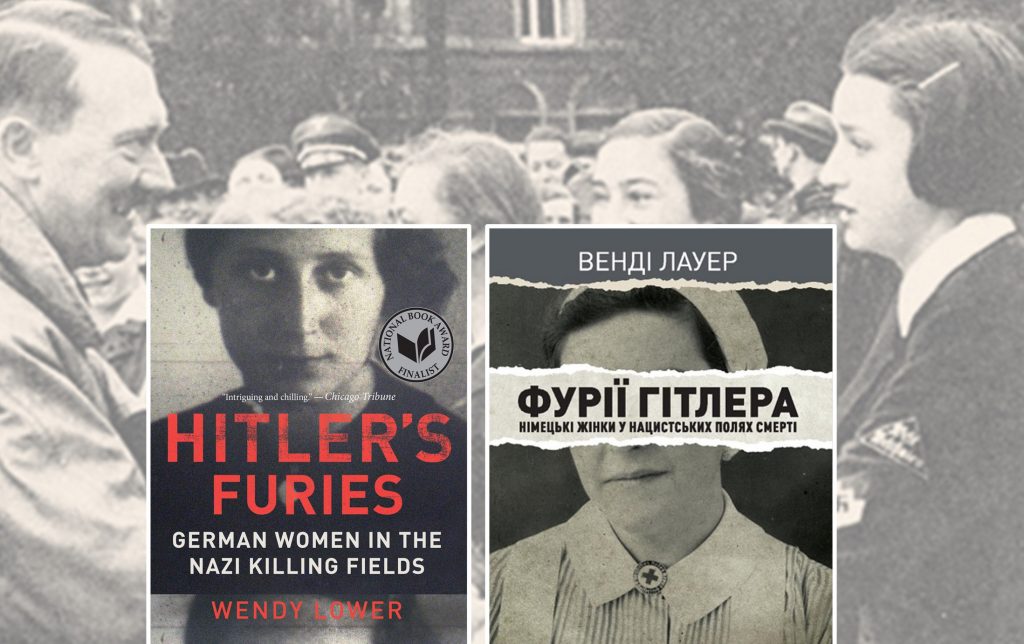 We spoke with Viktoria Ivanenko, the translator of this book, written by historian Wendy Lower.

Viktoria Ivanenko: The original version of the book Hitler’s Furies: German Women in the Nazi Killing Fields came out in the United States in 2013. It caused quite a furor. Timothy Snyder devoted many comments to it. This book came to us thanks to Nadia Ufimtseva, Program Director of the Ukrainian Center for Holocaust Studies. Nadia asked me if I would find it interesting to translate this book. I agreed. We decided that this book should appear in Ukraine because it is relevant and important material.

Iryna Slavinska: This book contains the biographies of women who, during the existence of the Third Reich, worked for the formation and development of the Nazis. Does the book take a portraiture approach?

Viktoria Ivanenko: The fundamental approach is through portraiture. However, since this is a work of non-fiction, it also features many historical commentaries, particularly documents that pertain to the trials of these women in the postwar period. The book contains many sketches of women who are not the main heroines of the book but who were involved, one way or another, in the Holocaust engine in the Eastern territories.

Iryna Slavinska: I can’t help recalling the novel The Reader. Is the heroine of this novel present in Hitler’s Furies?

Lower’s goal was to bring the study of German women in the Holocaust system into the everyday arena. For the most part, she talks about women who performed purely civilian tasks. They were nurses, schoolteachers, and daycare workers. They had no connection to any official positions. Lower attempts to sketch out those hundreds of thousands of women who often did not hold official positions yet were perpetrators of the Holocaust in the Eastern Territories. Her book is about the economy or recreation, where the wives of SS officers vacationed. She tries her utmost to reveal this stratum of everyday violence rather than well-researched concentration camp figures.

Iryna Slavinska: Why should any attention at all be paid to this dimension of women’s presence? If we are talking about women in everyday life in the context of the Holocaust, is such everyday work blameworthy?

Viktoria Ivanenko: Lower writes that no Holocaust engine can work without the broad support and involvement of society. However, society is comprised of men and women. Women in the Holocaust, apart from concentration camp guards, are barely mentioned. It is as though the history of women were taking place somewhere else, on another planet. The dramatic histories of women in this book reveal the darkest aspects of women’s activism.

The wives of SS officers who are described are people who were absolutely not compelled to perpetrate violence. They could have easily continued to live in Berlin, raising their children in Germany while their husbands headed the Gestapo in Ukraine. They had no reason, apart from their own desire, interest, and inclination toward violence, to go to Ukraine. They did not hold any positions; they had no orders; they did not perform any duties. This is interesting from the standpoint of the nature of human evil. It must be recognized that some women also know how to kill, love to kill, and want to kill. In this case, killing is a way of dominating others.

It is impossible to determine exactly the number of women without positions who were engaged in looting Jewish property. They were not the hand that pulled the trigger. Nevertheless, there was an immense number of women who, with satisfaction, created storage facilities and issued German women dresses, gold, and footwear against receipts.

Iryna Slavinska: What could have been the motive behind this dark side of women’s activism?

Viktoria Ivanenko: The book has a chapter entitled “Why Did They Kill?” In it, Lower meticulously examines various theories of violence, in particular the factor of a sense of power—you are the main person, you are important, and everyone revolves around you. This is a very serious matter that characterizes many people who walk alongside us.

Iryna Slavinska: Evil and violence were some of the ways of demonstrating power. It seems that Nazi Germany was not a country of equal rights and opportunities for women and men. Was it quite a sexist society?

Viktoria Ivanenko: Of course, there are several “buts.” A woman could not be included in the official party structure that determined power processes in the Third Reich. But in connection with this, Hitler, in one of his speeches, declared that the “primary hero of the Reich is the mother with many children.” A state decoration was even instituted. It was a great honor to give birth to five, seven, or eight healthy Aryan children. Of course, Hitler banked on breeding an Aryan race. And here, the woman was a key personage. There were huge social benefits, a respect from the public—everything that women did not enjoy before the Reich came into being. Any whims connected with social security were granted to women.

The Holocaust engine, the genocide engine, grew in geometric progression. When the men went to the front, there were not enough people left to work. Strange as it may sound, these were huge career possibilities for women that had not existed earlier. A peasant woman now had the possibility to come to Berlin, become a secretary at the Gestapo, receive a pretty good salary, and live not too badly: buy dresses, attend soirées, and lead a worldly life. This was a social breakthrough for women! That is why, with all the Third Reich’s sexism, there is a reverse side.

Iryna Slavinska: How does violence become a component of power that women—Hitler’s furies—can manifest in this context of the war and the Holocaust?

Viktoria Ivanenko: There is great stratification here. If we are talking very simplistically about stratification in the attitude to violence or participation in violence, [the range] is from eyewitnesses to direct female perpetrators. Even female eyewitnesses who come to the east (if they have positions: nurses, kindergarten teachers, schoolteachers) to carve out a career. In the Third Reich, spending time in the east meant skipping three or four rungs on the career ladder and, at the same time, obtaining a packet of advantages.

Iryna Slavinska: Do you mean the occupied territories of today’s Ukraine?

Viktoria Ivanenko: It was called the “East of the Third Reich,” encompassing Poland, the Baltic countries, Ukraine, Belarus, and southern Russia—what was known as the “Nazi East.”

What was the role of women eyewitnesses? Imagine that you are a kindergarten teacher, but whom are you educating? Clearly not Ukrainian and Belarusian children. The kindergarten teacher’s mission lay in Germanization. She came to a kindergarten, from where she was supposed to throw out all the Slavic children because they were unworthy of education. Her task was to find racially suitable children. If there was a Ukrainian or a Belarusian child with blond hair and blue eyes, then such a child could be accepted for a so-called trial period. If Germanization works, it means that there are Aryan roots somewhere. The horror of this is that even these women engaged in the segregation of society, which in and of itself is violence.

Of course, there were also secretaries who typed execution lists. Here is an interesting fact: Often, their bosses, who headed the Gestapo, allowed them to compile these lists; in other words, they were often the result of the secretaries’ whims. If they did not like a certain Jewish woman because she had sewn an ugly dress, let’s put her on the execution lists. The book describes such cases. Unfortunately, this was a mass phenomenon.

Female perpetrators are women who were directly involved in the killing of children, and Jewish children comprised the majority of Holocaust victims.

Iryna Slavinska: What do we know about the public reception of Wendy Lower’s book Hitler’s Furies?

Viktoria Ivanenko: The book attracted a lot of attention in the media. The Los Angeles Times published a lengthy review, as did The Washington Post and the Daily News. There were many reviews of this book. There was also a reaction from Deborah Lipstadt, who in 2000 won her case against the British author and Holocaust denier David Irving. The case attracted a lot of media attention because this was a decisive moment in research on the role of women in Holocaust Studies.

Iryna Slavinska: Why is it so important to talk about such new perspectives on the history of the Holocaust?

Viktoria Ivanenko: In her Epilogue, Lower writes that there is still much that we do not know and that she is only attempting to create a kind of kaleidoscope. In reality, the history of the Second World War and the Holocaust are a collage of histories, recollections of courage, brutality, heroism, and vileness. These histories have not yet coalesced into a single picture.  If we are speaking from the scholarly point of view, from the standpoint of methodology, there is no single, generally justified, and correct version of the Holocaust. More and more new facts are being added. The only officially recognized fact is that the Holocaust took place. But there is much that still needs to be researched in order to understand the forms in which it occurred.

Iryna Slavinska: If we were to give readers from Ukraine advice about why it is worth reading this book, thinking about the Ukrainian context, among others, what could we tell them?

Viktoria Ivanenko: I very much hope that a lot of people will read this book, especially about the formation of the Third Reich; about the rise of men’s paramilitary groups that fought against feminism; about the emergence of people who said that the mother-heroine is the protectress of the nation. There are a lot of contexts that are in tune with modern Ukraine. Some quotations could not be translated without causing my hands to tremble because there was a feeling that I was translating the utterances of the Third Reich about trends that can be observed in contemporary Ukraine.

In order for history to stop going in circles, you have to know it. The history of the Second World War, the history of the Holocaust—this is also the history of Ukraine. In order to avoid a repetition, to stop walking in place, and not step on the same rake, it is necessary to understand certain things, once and for all, to stop there.