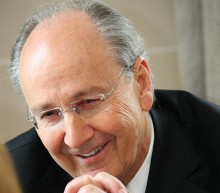 Babi Yar was one of those tragic pages in the history of the Ukrainian and Jewish people.   The Soviet government silenced this tragedy and even punished those, who tried to pay tribute to those victims buried in this ravine.  Ukrainian intellectuals suffered in an attempt to commemorate the 25th anniversary of this tragedy in September 1966: writers Viktor Nekrasov, who in time was sent out of the country, and also Ivan Dziuba, who was imprisoned.

Only at the moment of achieving Ukraine’s independence did it become widely-known in society that this tragedy occurred.  In Sept. 1991, practically a month after the declaration of of independence was the 50 year anniversary of Babi Yar commemorated on the government level.

In Kyiv in recent days an event took place that bears witness to the deepening dialogue and mutual understanding between the Ukrainian and Jewish people, which in effect are the continuation of the process of reconciliation that began in 1991.

One such event was the three-day meeting of the Board of Governors of the Jewish Agency for Israel (Sochnut), which concluded yesterday in Kyiv.  Participating were the leaders of the Jewish Diaspora from North America and Europe, as well as Australia.  Traditionally the leading representative of Jewish communities and Zionist organizations from the world over and Israel – and they number 120 individuals – conduct this event in Jerusalem.  The only exception to this rule in the more than 90-year history of it existence was conduction the Board of Governors meeting in Argentina with the goals of supporting the Jewish Diaspora in that country.  And now the Board of Governors of the Jewish Agency, which works on questions of vital importance to the Jewish community globally, for the first time, conducted its conference in Ukraine.

“This is a symbol of the importance of Jews in Ukraine and the countries of the former Soviet Union for Jews universally, and also the important of the development of relation with Ukraine,” said Natan Sharansky, who is the head of the Jewish Agency (and well-known Soviet ‘prisoner of conscience’).

At the same time, the head of the American Loews Corporation, with assets of $16 billion James Tisch, during his speech at the gala event at the Intercontinental Hotel, noted that the conference in Kyiv push to cooperation with Jewish and Ukrainian communities in Ukraine.  It is worth pointing out that other than Mr. Tisch there were many foreign guests are listed on the Forbes rating of world’s wealthiest individuals.  Among them: Johanna Arbib (Italy, Patron Capital, $10 billion); Julia Koschitzky (Canada, IKO Industries, $8 billion); Sami Bollag (Switzerland, Bollag-Guggenheim [Fashion] Group, $6 billion).

Alexander Levin, the president of the World Forum for Russian Jewry and the head of the Jewish community in Kyiv, presented at the gala evening the model of external design of the memorial complex that will be built at Babi Yar at the place of the mass shooting of Soviet citizens in 1941, the majority of whom were Jews.  Within the complex will be a community center that will become a bright symbol of rebirth, on the same spot where an attempt was made to wipe Jews off the face of the earth.

Mr. Levin said that he invites European heads of state, and first of all the president of Ukraine, to become members of the board of the memorial complex at Babi Yar, which will immortalize the tragedy of the Jewish people, but all of Europe and the world.

In his words, the complex will be built with the funds of Ukraine’s Jewish community.  He added that in the near future the project’s approval is anticipated by the respective structures in Kyiv, an construction will begin this year.  Mr. Levin did not know the exact cost of the project, indicating that it will cost several tens of millions of dollars.  American specialists will develop [computer] programs for interactive demonstrations in the museum complex.  Ukrainian companies will build the museum.

Another no less important event was the presentation the evening before last in Kyiv of the Andrei Sheptytsky Medal 2013.  The first laureate of the medal in honor of the metropolitan, who was the leader of the Ukrainian Greek Catholic Church from 1901 to his very death in 1944, became the well-known Canadian businessman, the founder and chairman of the board of the “Ukrainian Jewish Encounter,” organization, James Temerty.

The Chief Rabbi of Kyiv and Ukraine Yaakov Dov Bleich, in presenting in the Reception Building in Kyiv the first laureate of the medal in honor of the Metropolitan Andrei Sheptytsky 2013, said, “A dream became reality and the world recognized the ideas of the metropolitan’s ideas as a leader who looked into the eyes of real life and against the danger saved Jews.  Thanks to his courageous actions over 160 Jewish lives were saved during the Second World War in Ukraine.”  In the rabbi’s words, the idea of creating this medal was proposed together by Jews and Ukrainians.  In particular, he noted, exactly the Canadian businessman, the founder and head of the board of directors of the organization “Ukrainian Jewish Encounter” James Temerty (his father was Greek, his mother Ukrainian), was the first to propose to do something so the world would recognize the Sheptytsky’s actions in saving Jews.  As a result, the Jewish Confederation of Ukraine founded the medal to honor the contributions in the cause of Ukrainian-Jewish mutual understanding and collaboration.

“In addition,” added Mr. Bleich, “the Canadian parliament unanimously adopted a resolution in which it recognized Sheptytsky’s actions.”  It would be good if Ukraine’s parliament adopted a similar resolution, the rabbi said.  He also said that in the future, one or two laureates will be recognized with the medal every year.

Mr. Temerty was born in the Donbas, and moved to Canada 60 years ago.  He received this medal for his devotion to the idea, and also for actions, that are directed toward the achievement of mutual understanding and deeper ties between Ukraine’s and Jews.  The organization [UJE] was established in 2008 – by the way a contribution of those present at this ceremony were Victor Yuschenko and his wife Kateryna, who is a member of the advisory board -- works in Ukraine, Israel and amoung the Ukrainian and Jewish Diasporas with the goal of supporting close and wider relations between nations.  Mr. Temerty supports youth, civic, cultural and other social initiatives, conferences and university programs, that are dedicated to these goals, in Ukraine, Israel and in the Diasporas.  He recently founded at the Ukrainian Catholic University in Lviv three departments, the work of which is focused on themes tied to Ukrainian-Jewish mutual understanding.

Also present at this ceremony was ex-president of Ukraine, Leonid Kravchuck, who sees the establishment of the medal as a manifestation of humanism – to forgive one’s own pains and to apologize.  In his words, both peoples understood that there is no other road than to be together and to be able to remember the past.  Kravchuk also noted that today’s meeting showed how it’s necessary to go to reconciliation and if the past is subordinate to the future, then all problems can be solved.

“If we look at the positive, then we’ll build this future,” the rabbi of Kyiv and Ukraine noted in his speech.

The Supreme Archbishop of the Ukrainian Greek Catholic Church Sviatoslav considers the investiture of the award a step into the future in as much, in his words, that the person of Sheptytsky predicts unity and the future.  “He who has not reconciled with the past lives in a heavy present and its difficult for him to build a future,” added Sviatoslav.

At the same time, Natan Sharansky, who admitted that in Soviet times he never heard about Sheptytsky, who saved Jews and called others to save them, also said:  “He, who saved one soul, saves the entire world.  Sheptytsky saved the idea of friendship and mutual understanding between the Ukrainian and Jewish people.”

And if the main belief of a people lies in the idea of national freedom and pride, then this belief does not hinder, but is a guarantee of friendship, added the head of the Jewish Agency for Israel (Sochnut).

Along with this, Mr. Temerty believes that the road to rapprochement between the Ukrainian and Jewish people will be long.  And if Ukraine wants to draw closer to the European Union, then it should demonstrate by its behavior by preserving the memory of the Holocaust.  The approximate loss among the Jewish population in Ukraine was nearly one million people.

Mr. Temerty believes that Ukraine should join the organization that works in investigating the places of mass burial sites of Jews in Eastern Europe, and also introduce an educational program about the Holocaust in schools and institutes.  Along with this, in his opinion, it’s important to begin building a museum of the history of the Jewish people.  In the words of Kyiv’s rabbi, in Moscow in a similar museum, almost 50 percent, and even 60 percent, of the exhibits are tied with Ukraine, and in Poland, it’s a similar situation.  Then, considers Mr. Bleich, taking from there materials to Ukraine, it will be possible to create a complete museum of the history of the Jewish people.

The vice premier in charge of humanitarian question Konstantin Hryshenko in his speech noted that an open dialogue is conducted between Ukraine and Israel regarding the dramatic pages, which needed to be remembered, so as not to repeat that what was in the past.