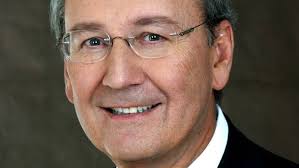 Distinguished Canadian entrepreneur and civic leader, benefactor of the UkrainianCatholicUniversity, founder and chairman of the Ukrainian Jewish Encounter Initiative (UJE), James Temerty has become the first recipient of the Metropolitan Andrei Sheptytsky Medal. The award ceremony was held on June 24 in Kyiv.

The award was established by the Jewish Confederation of Ukraine for contributions to the cause of Ukrainian-Jewish understanding and cooperation.

The leaders of the celebration were the head of the Ukrainian Greek Catholic Church (UGCC) Sviatoslav Shevchuk and Chief Rabbi of Kyiv and Ukraine Yaakov Dov Bleich. The ceremony was also attended by two former Presidents of Ukraine Leonid Kravchuk and Viktor Yushchenko and representatives of the diplomatic community in Canada and the United States.

In his speech, Patriarch Shevchuk emphasized Metropolitan Sheptytsky’s ability even in the most difficult life circumstances to see his neighbor as a child of God, and therefore as a brother or sister in God. Only with such a perspective, according to the patriarch, can people overcome divisions, respect the dignity of others, and have the courage to risk their lives for the sake of their neighbors.

“This medal honors those who work for Ukrainian-Jewish understanding and the development of relations between Ukrainians and Jews, inspired by the example of Metropolitan Sheptytsky, and those who believe that the common past that divided us should not be an obstacle to a common future that will unite us,” Vice Rector of UCU Taras Dobko said during the ceremony. “Metropolitan Andrei is the founder of the UkrainianCatholicUniversity and his legacy is reflected in the mission of UCU, in our development plans, academic programs, and education of our students.”

According to Taras Dobko, there is no better recipient of the first Metropolitan Andrei Medal than James Temerty, who for many years in different fields has demonstrated persistence in fostering rapprochement and mutual understanding between Ukrainians and Jews: “We are grateful to Mr. Temerty that UCU, which thanks to his generosity established three endowed chairs in Jewish Studies, may also contribute to the creation of a common future,” said the vice rector.

James Temerty chairs the Ukraine-Jewish Encounter Initiative, which carries out its activities in Ukraine, Israel, in the Ukrainian and Jewish diasporas. He is the founder of three departments at the Ukrainian Catholic University that study Jewish-Ukrainian relations. James Temerty supports similar initiatives at the Hebrew University of Jerusalem. He is also a benefactor of the new Holodomor Research and Education Consortium of the Canadian Institute of Ukrainian Studies at the University of Alberta in Canada.

According to the organizers, the medal named in honor of Metropolitan Andrei is awarded to people who have dedicated themselves to fostering friendly relations between the Ukrainian and Jewish peoples. “Thanks to the efforts and courageous actions of the head of the UGCC Metropolitan Andrei Sheptytsky over one hundred and sixty Jewish lives were rescued during World War II,” says a statement by the organizers.