UJE at BookForum 2021: the winner of the "Encounter: The Ukrainian-Jewish Literary Prize™" is announced 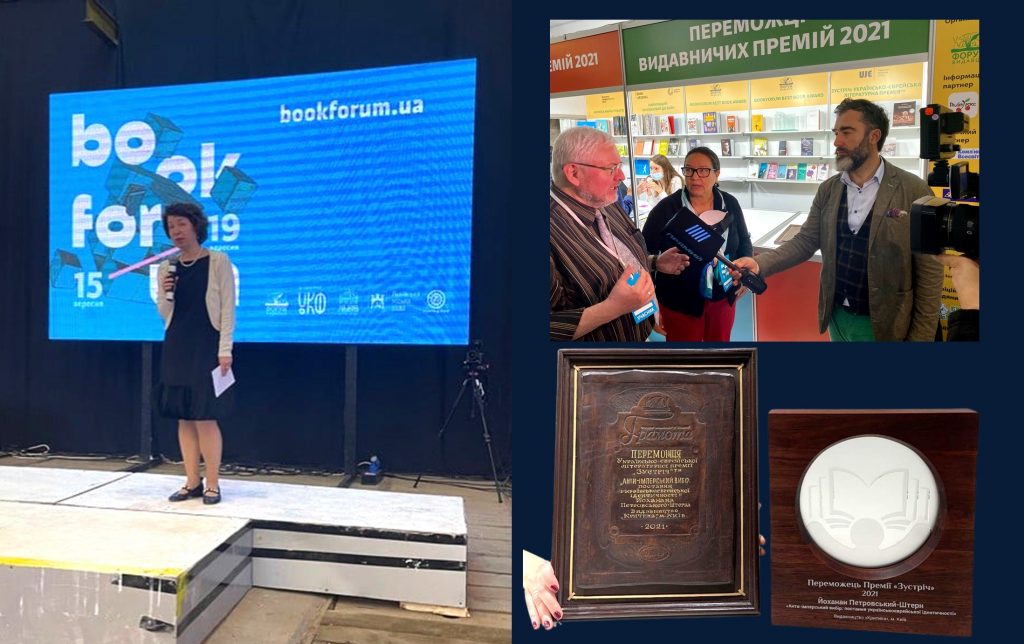 [Editor's note: The theme of the 28th International BookForum, which took place in Lviv on 15–19 September 2021, was "The Game of Growing Up." The Canadian charitable non-profit organization Ukrainian Jewish Encounter held several important discussions during the fair, which took place in a hybrid format, with some events held live and others online. Over the next few weeks, we will be screening video recordings of UJE-supported events and panel discussions that took place at this year's BookForum.]

One of the special events at the BookForum was the announcement of the winner of the "Encounter: The Ukrainian-Jewish Literary Prize™" in the category of non-fiction, which marked the start of the Lviv BookForum on 15 September 2021 року.

Jury member Liliana Hentosh announced the winner of the Encounter Prize, which went to Yohanan Petrovsky-Shtern for the Ukrainian-language translation of his book The Anti-Imperial Choice: The Making of the Ukrainian Jew.

Speaking on behalf of the jury, she said: "It is very difficult to select one book. We followed criteria that we ourselves formulated, and it so happened that we chose this book, with no other options, by a joint decision. Yohanan Petrovsky-Shtern's scholarly work reaches a high level of academic achievement, and it also touches on important questions. The author analyzes the biographies and works of five writers and shows how Ukrainian-Jewish culture and history mutually influence each other. Through these writers' works, about which Petrovsky-Shtern writes, something new, interesting, and very important emerges. I think that it was obvious to us that this book promotes understanding between the two peoples and fosters a better understanding of culture, both Ukrainian and Jewish. We salute both the author and the publishers of this book."

During the public discussion of the Encounter Prize the following day, 16 September 2021, Liliana Hentosh added: "There are very many under-researched scholarly topics. On the one hand, there will be considerable interest in writing scholarly works that would relate to the history of the Holocaust in Ukraine but which would be based on material that has not been utilized; for example, from the archives of the secret services or collections of extant memoirs.

During the public discussion, jury member Marko Robert Stech said: "My focus is on cultural relations, and in this, I support Liliana Hentosh's thesis because I very much want to read new scholarly works on Ukrainian-Jewish relations in classical music and painting. For example, Abram Manevich, who was not only one of the co-founders of the Academy of Arts in Ukraine during the period of the Central Rada, and positioned himself as a Ukrainian, but even after he emigrated, he and Davyd Burliuk presented themselves as Ukrainian artists. Everyone also knows that Manuil Shekhtman was one of the Boichukists. In other words, among those groups that were considered Ukrainian were some very distinguished Jewish artists. In general, in painting and music, where language does not play a significant role, it is especially interesting to research these topics."

As regards the importance of the Encounter Prize for Ukrainian literature, the jury head Mykola Riabchuk said during the public discussion of the prize: "If we are speaking concretely about essay writing, there is serious competition in Ukraine, because there is the Yuri Shevelov Prize. But, as far as I know, there is really no significant prize for scholarly works in Ukraine, and this must be taken into consideration because this, our first prize, performs multiple functions in various fields."

The "Encounter: The Ukrainian-Jewish Literary Prize™" 2021, an interview with the jury members, Lviv, 28 BookForum, 16 September 2021
(in Ukrainian)

Peter Zalmayev from The Week on the "Encounter: The Ukrainian-Jewish Literary Prize™" 2021
(in Ukrainian)