Vasyl Makhno in Israel: “The Interpenetration and Interaction Between Our Worlds Are Obvious”

The Ukrainian poet from New York Vasyl Makhno visited Israel 9-19 June 2014. Miriam Feyga Bunimovich on behalf ofUkrainian Jewish Encounter talks with the poet about his impressions of the journey. 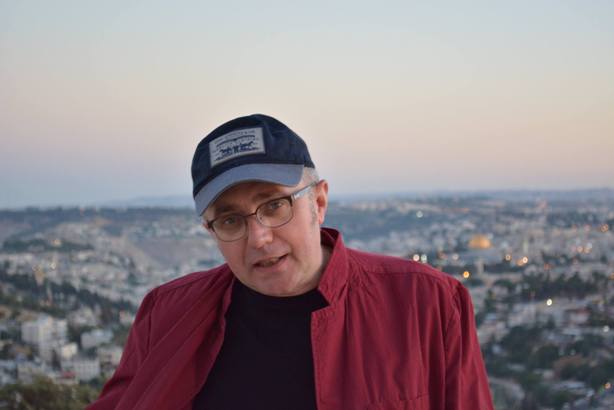 MIRIAM FEYGA BUNIMOVICH: Is your trip to Israel a sequel to your encounter with the Jewish world, your personal spiritual pilgrimage, or the search for something Ukrainian in Israel?

VASYL MAKHNO: This is an interesting question. In responding I could combine different aspects, but first and foremost, it was a personal pilgrimage. Not everyone merits seeing and feeling this domain that is called Jerusalem. I recall that while gazing at the Garden of Gethsemane, I was trying to compare images of this place with those imagined during my childhood when I saw the village icons in Galicia. Of course, when your eyes fall upon Biblical and Christian shrines, this forces you to think differently about everything. When you are in the hills of Jerusalem, when your shadow floats along the walls of the Old City, you feel that the text, the word, can materialize. This is an awareness of all-involvement into everything in this world. At another point, my hasty acquaintance with the Jewish world in Israel has affirmed my assumptions that the Jewish world is deeply rooted in the book, in the word, to some extent in mysticism, and it is still in a remarkable manner diverse, both ancient and contemporary. What is the Jewish world, and how does it interact with the Ukrainian one? There can be thousands of answers, but for me the interpenetration and interaction of our worlds are quite obvious. In my childhood, the Jews were always present in the memories of my grandparents. Now, in my poems and essays, I feel like filling in those gaps in memory that I've inherited. 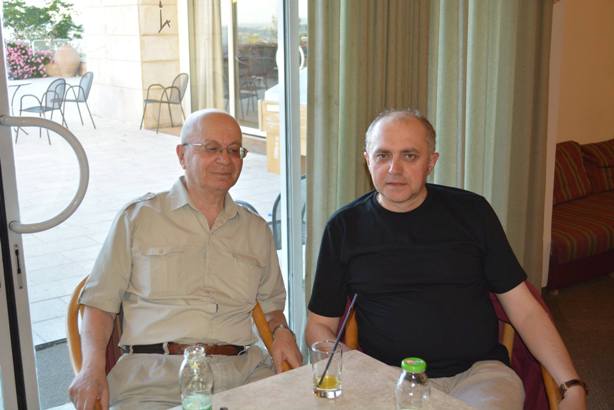 MFB: You mentioned your first encounter with the religious Jews of New York and you have a special attitude to the great figures of modern Israeli literature—Agnon and Amichay. Jewish phenomena, places, and characters are particularly noteworthy in your poems inspired by your recent visit to Eastern Europe. How does the experience of getting acquainted with Israel continue this line?

VM: Actually, when I first saw Hasidim on the streets of Borough Park in Brooklyn, I had a sense of eras blending. Later I discovered most of them have Ukrainian ancestry. I also read a lot about religious Jews and their lives. In my “Brooklyn Elegy” I wanted to capture at least the very landscape of the Hasidic world which fills the streets of Brooklyn like flowing rivers in spring fill their shores. During my stay in Safed on the Sabbath, I leaned against the white stone wall, and in front of me unfolded the Galilee mountains: blue, green, yellowy. Somewhere far away, on the edge of an steep hill, a Hasid walked slowly after the mikveh [ritual immersion in Judaism – MFB], and this ascension of a person after a ritual bath against the background of Biblical mountains became for me a metaphor of fulfilling one's purpose in some larger, perhaps even existential dimension. Almost at the end of my stay in Jerusalem, I visited the house of Shmuel Agnon. First of all, Agnon is a native of Buchach, which is quite close to my hometown Chortkiv. Secondly, I met his daughter Emunah Yaron in the early 1990s in Ternopil. We spent almost a day speaking in Polish through her husband, who came from Lodz. As for Amichay, this is quite a New York story, which is actually precisely rendered in the poem “Yehuda Amichay.” I read the poet's works back in Ukraine, getting Polish translations through my friends. Anyway, both Agnon and Amichay were and remain for me an insightful Jewish text. On my return to New York, I discovered by chance the writer Yoram Kaniuk, whom I had never heard about. It turned out that Kaniuk's father came from Ternopil. So now I'm reading Kaniuk's novel Life on Sandpaper. How does this experience carry on? I’ve started writing new poems, tentatively entitled “The Jerusalem Cycle.” I'm also planning to write an essay about Israel. 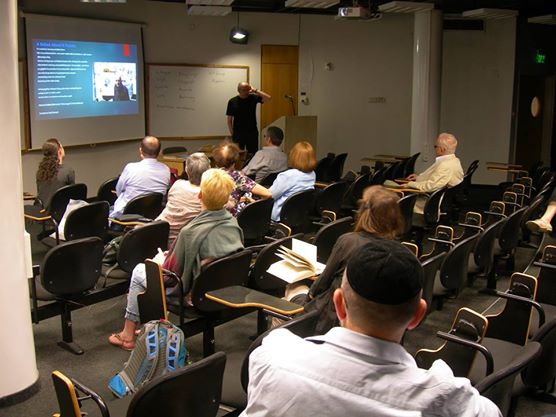 MFB: What places have you visited? What local scenery has impressed you most?

VM: I have been to several cities: Jerusalem, Tel Aviv, Haifa, Acre, and Safed. A certain feeling of fragility between peace and war was accompanying me everywhere, though high in the mountains of Galilee birds are singing, bumble bees are buzzing, and Hasidim are praying, swaying in the amplitude of their prayers. 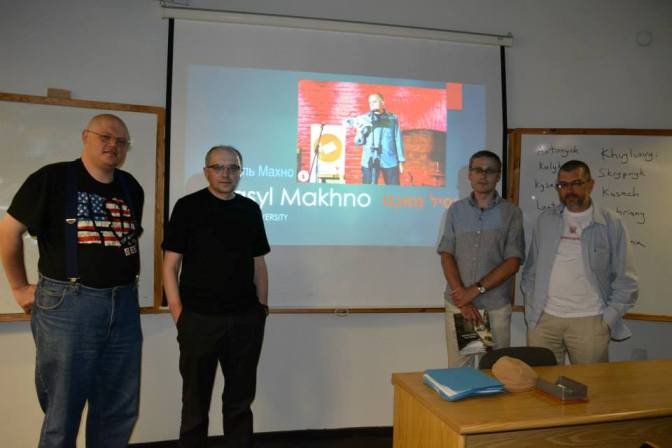 MFB: I'm quite sure your encounter with Christian shrines has inspired you in a special way, and your recent poetic texts reflect this. Please, say a few words about that.

VM: I think these new poems are a personal synthesis of worldview and poetic experience (if any experience is possible in poetry at all). Christian places, characters, and events cross over from Biblical text to contemporaneity, and thus the thread of time is lost as it's woven into the words and emerges in the past as well as in the present. Therefore, perhaps, this idea of all-involvement is felt in such an acute way in the Holy Land. And yet, these poems render a reckoning with myself. 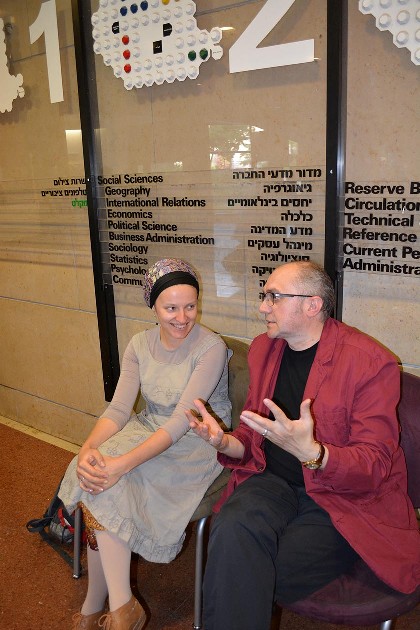 MFB: Which “Ukrainian” encounters in Israel are memorable?

VM: First of all, my journeys through time and space with Professor Yohanan Petrovsky-Shtern who was, in fact, the initiator of my visit to Israel and with whom I traveled through half of the country. Within the walls of the Hebrew University I met Professor Wolf Moskovich who profoundly impressed me by his deep understanding of Ukrainian-Jewish relations. Meeting with the Ukrainian poet Anna Fleitman; with you; telephone conversations with translators Anton Paperny and Israel Spector, the writer Alexander Deko. I've experienced a real sense of Ukrainian space present in Israel. I am profoundly grateful to everybody. 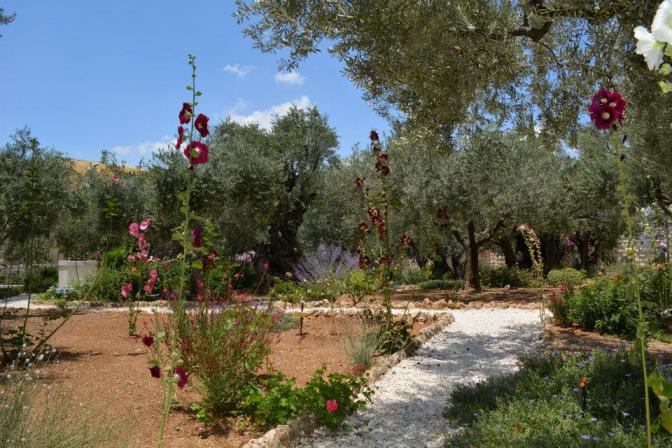 Hollyhocks in the garden of Gethsemane. Photo courtesy of Vasyl Makhno. 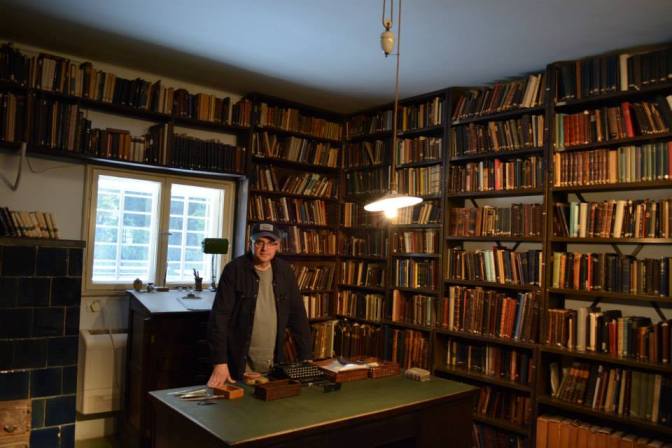 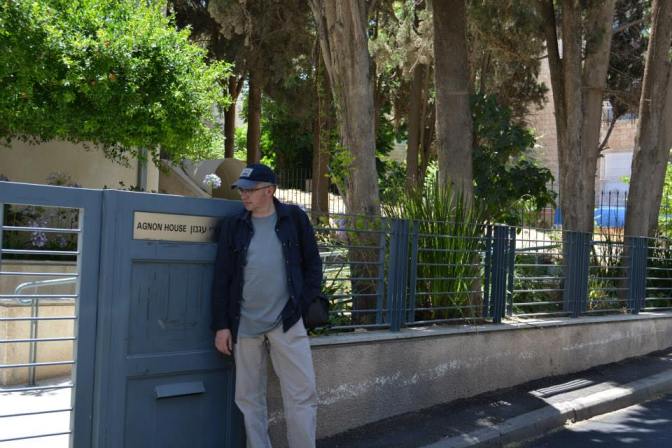 At the Agnon House. Photo courtesy of Vasyl Makhno.