“When you write about Galicia, you cannot ignore its multiculturalism”—Vasyl Makhno about his novel ‘Eternal Calendar’ 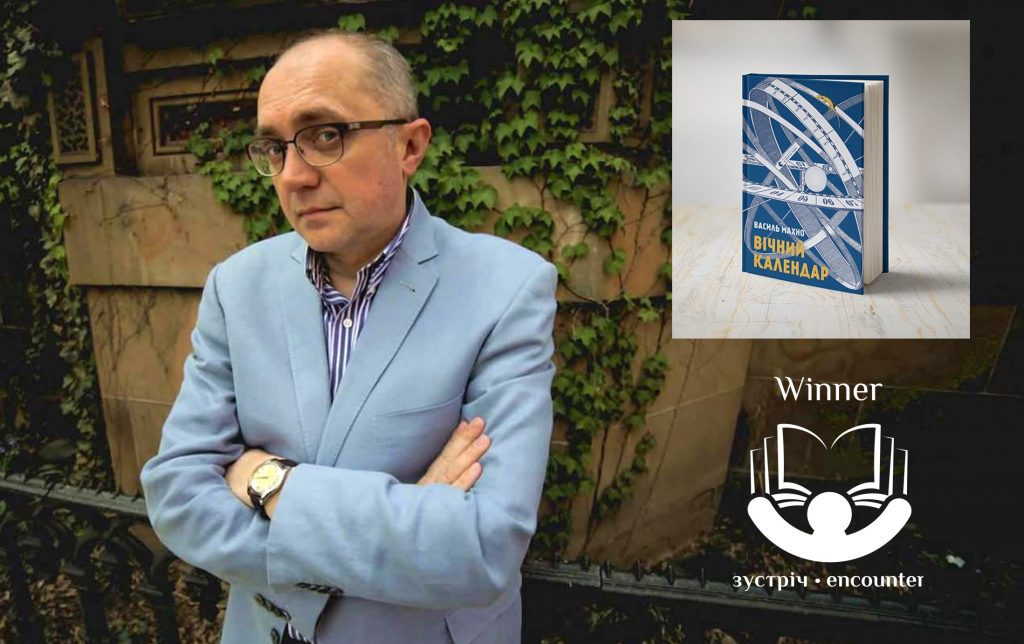 [Editor’s note: “Our stories are incomplete without each other” is the slogan of Ukrainian Jewish Encounter, which, with the support of the Lviv, Ukraine-based “Publisher’s Forum” is sponsor of “Encounter: The Ukrainian-Jewish Literary Prize” ™.]

“Encounter: The Ukrainian-Jewish Literary Prize” ™, founded in 2020, is awarded every year for the most influential work of fiction or non-fiction (alternate years), which promotes Ukrainian-Jewish understanding by helping strengthen the position of Ukraine as a multiethnic society and embodying the slogan, “Our stories are incomplete without each other.”

Vasyl Makhno has won the prize for his novel Eternal Calendar, which was issued by the Old Lion Publishing House.

Vasyl Makhno: For me, it was particularly important to build a linear and non-linear narrative. I began from the late seventeenth century because, for the epicenter of the narrative, I chose a tiny corner: a large village between Buchach and Chortkiv. It was important for me to depict some dramatic shifts in that historical process which this land was experiencing; these people, these ethnic groups that lived there; those events that took place there. I chose the first point; the first chapter is about the Ottomans conquering Yazlovets, the last point of their empire. For twenty-two years, this land remains under Ottoman rule, the starting point of the narrative. Because changes are taking place in the global world of that period, especially in Jewish communities, in Christian communities, the narrative begins from all this. It reaches to our present; to New York and to the return to Yazlovets.

It was important for me to write this novel because I wanted to layer local history onto the global one from a different side; [to show] how it all resonates, how all this takes place; why various ethnic groups come together in this small space. This is the eternal migration, the eternal flow of families, people, and so on—the Brownian movement of history.

I want to emphasize that this is not a historical novel. The events take place in time; time has its own characteristics, its own signs. When I began working on it, I realized that I simply had to see some things. That’s why I went to Istanbul, I was in Jerusalem; I visited Yazlovets when I was in Ukraine, so that all the details would be more or less authentic.

Iryna Slavinska: How natural is this topic for you as an author?

Vasyl Makhno: Absolutely natural. I grew up on this. I heard all this since my childhood: different languages, the reminiscences of loved ones about the periods of Austria-Hungary, Poland, and so on. It was never a problem for me to understand that it was not just we Ukrainians who lived there; there were others. The thing is that these others disappeared somewhere and as a result of what, I, being a child could not understand. I lived in this linguistic and ethnic brew. When I grew up and began to write, I thought a lot about this. I have addressed this topic not just in Eternal Calendar but also in my essays. When you write about Galicia, you cannot ignore its multiethnic nature and multiculturalism. These borderlands accompany you both in texts and in life.

Iryna Slavinska: Were “these others” talked about in your family, among your loved ones?

Vasyl Makhno: I remember my grandfather and grandmother recalling that there had been Jewish families in the village, what their names were, who lived where. It was always there; it was always articulated. It was an axiom. For me, this diversity was natural.

Iryna Slavinska: Do you sense that attention to this topic, the dialogue between the multicultural and the general public, is increasing a bit in current Ukrainian literature?

Vasyl Makhno: Yes, I absolutely sense it. I see such trends. I would like to say that we are not the first ones to begin this. Recall the works of Ivan Franko, Tymofii Borduliak, not to mention the stratum of early-nineteenth-century Jewish literature, where all these things took place. Elements like borderlands, these difficult questions that exist in these borderlands are not articulated that much about Transcarpathia, Bukovyna, or the Donbas.

Here there is a thin membrane of all this. On the one hand, we can outline many problems by means of this borderland and actualize these things in order to understand the current state of the Ukrainian political nation and generally how a new society is supposed to be constructed in Ukraine; on the basis of which values.

Every region has certain characteristics, certain historical cleavages about which we might not know. Perhaps I will be too categorical, but sometimes it seems to me that contemporary Ukrainian literature does not pose great ideas that make prose—prose. One of these great ideas is the idea of these borderlands and life in them. This eternal problem of borders, mixing of ethnic groups, culture, confrontations, coexistence, and so on, are reflected in them; this diversity, this mosaic is a characteristic feature of the European continent and the history of European life. Whether we want it or not, this is an important moment that every literature, including Ukrainian, should discuss.

Iryna Slavinska: In this sense, it is interesting to look at the beginning of the novel Eternal Calendar. The story begins in the fall of the year 5426 since the creation of the world; 1666, after the birth of Christ; 1115, according to the Armenian chronology; and the year 1076, according to the Islamic calendar. Four different chronologies and four worlds, times, spaces—do they intersect or not?

Vasyl Makhno: They do intersect. I tried to do this in a delicate manner: Where they could intersect, they intersect. These chronologies are there in order to understand that there exist various views of the world, various chronological boundaries. They are parallel, but they can also intersect. We should understand this movement of the historical development of every ethnic group or religion, which takes place, on the hand, within its own closed flask; on the other, this flask can crack, smash, and then the consequences are quite complicated. Or they can conduct a dialogue.

At the same time, there is a biblical background in the novel, if you read it carefully. It becomes this kind of backdrop and casts a light on all these events that are marked from the year 1666 to the present day. That is why the idea of messianism, which was born during that period, was important to me.

Iryna Slavinska: Can one say that a Ukrainian-Jewish encounter is taking place in the pages of the novel Eternal Calendar?

Vasyl Makhno: Unquestionably. It takes place in various elements. I wanted to show this throughout the entire period, beginning with the character of the Ashkenazy; with the Friedman tsaddiks of Chortkiv in the second part. The third part depicts the fate of the family of Sasha Bondar, an artist who was born in Chortkiv.

One of the most important encounters is the encounter between Ukrainians and Jews in the pages of the novel—in the meaning of coexistence and existence.