“Through Agnon’s Texts: From Buchach to Jerusalem.” UJE at the 2019 Lviv BookForum 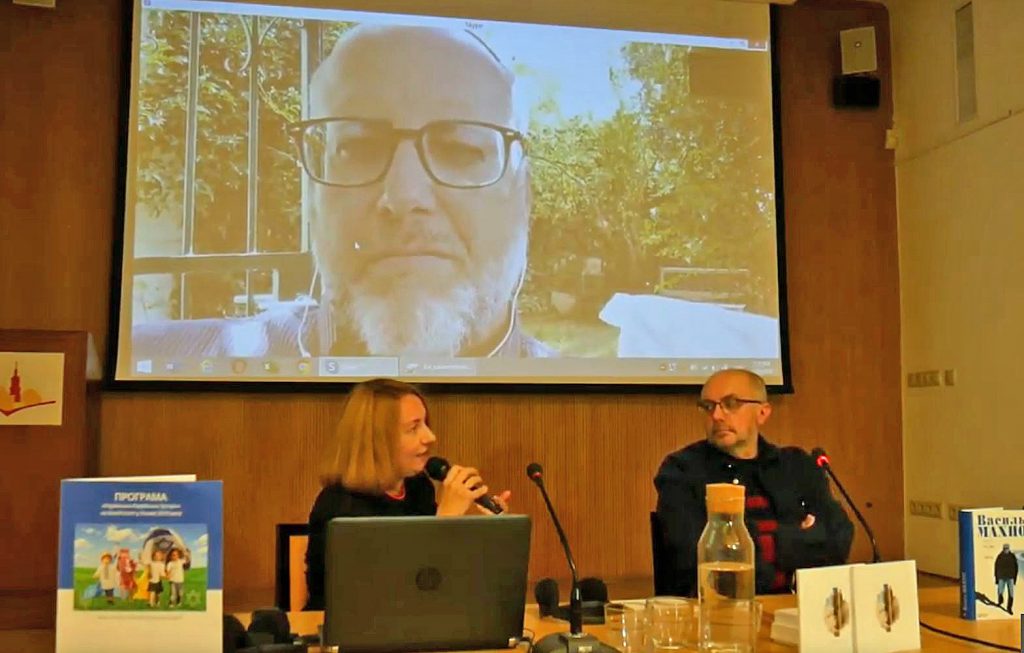 Ukrainian Jewish Encounter (UJE) is a Canadian philanthropic organization that has been working since 2008 to strengthen relations between our two peoples. This year marks the sixth time that we are presenting our organization’s initiatives and projects to the participants and visitors of the BookForum in Lviv, and, in the interests of a broader international dialogue, supporting discussions around books that reinforce and affirm the values that we disseminate.

On 20 September, the 2019 BookForum featured a discussion on the topic “Through Agnon’s Texts: From Buchach to Jerusalem,” as well as the launch of the literary residency in Buchach and a trilingual collection of essays entitled The Key in the Pocket. The participants of the discussion were Rabbi Jeffrey Saks, Director of Research at Agnon House in Jerusalem; the writer Vasyl Makhno, and Mariana Maksymiak, Program Director of the Agnon Literary Center.

The discussion centered on the literary residency project in Buchach, which has taken place twice in the last few years on the initiative of the Agnon Literary Center. This year the Ukrainian writers Vasyl Makhno, Oleksii Chupa, and Yevheniya Kononenko are the guest writers. The discussion also featured input from Rabbi Jeffrey Saks, representing the Agnon House of Jerusalem, who is a researcher of the literary heritage of Shmuel Yosef Agnon.

Saks talked about the close connection between Buchach and Jerusalem that exists in Agnon’s texts, and about the relationship and similarity between these cities, which were very important to the writer. Today Buchach is an inimitable place of return for Agnon, a point that was highlighted at the launch. The mention of the importance of and crucial need for Ukrainian-language translations of Agnon was also apropos because his work is still little known in Ukraine, despite the fact that he was born on Ukrainian lands and won the Nobel Prize for Literature.

Vasyl Makhno, one of this year’s resident writers, shared his impressions of his stay in Buchach, his view of this town, and the treatment of its cultural and literary legacy. Many of Makhno’s published books and texts mention Buchach and its multicultural character and specialness. They also mention Jerusalem and his visit to Agnon House during his trip to Israel.

Agnon’s texts are topical and, to a certain degree, even timeless. They are a kind of model of human relations and the relationship with God. In view of this, it is incorrect to say that Agnon is archaic or irrelevant. Moreover, he is universal: from Israel to China, Ukraine, and the United States as well as a whole slew of Eastern European countries.

We invite you to watch the video of the launch.

This event was made possible by the Agnon Literary Center and Ukrainian Jewish Encounter.

“Through Agnon’s Texts: From Buchach to Jerusalem.” Launch of the literary residency and the collection The Key in the Pocket, with the participation Rabbi Jeffrey Saks, Director of Research at Agnon House (Israel) and the writer Vasyl Makhno (Ukraine, U.S.A.). Moderator: Mariana Maksymiak, Program Director of the Agnon Literary Center (Buchach), Lviv, 20 September 2019, (Video in Ukrainian and English).